Archive for the tag “Thi’sl”

Ok, so getting the pictures for this post was a little difficult. And if I am breaking any copyright laws, please forgive me.

We are going to play a little game. I want you to look at the pictures below and tell me if you think they are creative, artistic and beautiful in their own right. 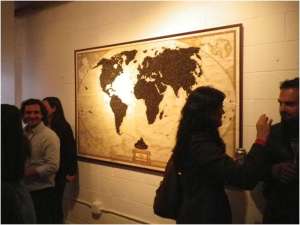 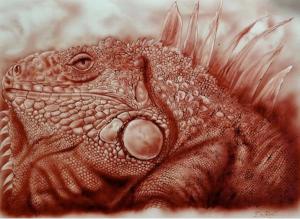 Did you think those pieces of art were amazing?

When I first saw them, I did.

Then I realized what I was looking at. The first picture was made with poop. That’s right, it is called “fecal art.” I found a whole bunch of amazing pictures made with poop as I was searching.

The second piece of art was made with blood.

The artist uses HIS OWN BLOOD to make beautiful art!

In both of those pictures, something that grosses us out or that we think of as taboo was used to make something beautiful. We never would have thought to use poop or blood to create beauty. But someone else did, and we enjoyed it!

Is there anything in your life that you can think of that isn’t beautiful? How about some of the mistakes you have made?

I know I have made a lot of pretty big mistakes in my life.

I have gotten a divorce. And because of my divorce, my life has taken a lot of twists and turns that caused pain in the lives of my ex-wife, my children, and even many of the relationships that I have had since the divorce.

Take a look at this picture. 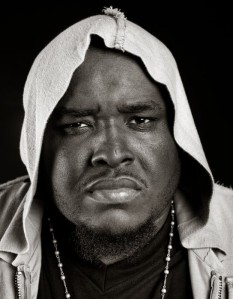 This man is Travis Tyler, also known as Thi’sl. He grew up on the west side of St. Louis, one of the worst neighborhoods in America. Many people, just by this picture, would write this man off. Add his bio in there and even more would have written this man off as a common thug or criminal. And honestly, you wouldn’t be far from wrong if you did. At 13 he was expelled from school for carrying a weapon. By the age of 18, he was into some very heavy drugs and street life was his identity. So he was that common criminal. That thug.

But just like Freddie Gray, an Thi’sl, the story is always deeper. As it is with myself as well.

See for Thi’sl, he grew up without a father present. His mom had to make ends meet by working almost every day and every night. He was raised by his grandmother. He knew murder first hand. One of his cousins was murdered and it changed his view.

Thi’sl has made a lot of mistakes in life.

He has no one to blame but himself for those that he hurt.

But THANK GOD the story doesn’t end there.

Within 2 years of the murder of his cousin, he was writing raps about God and studying Scripture. His first album, Chronicles of an X-Hustler debuted at #4 on the iTunes hip hop charts.

His music is about his past. About his pain. And the pain he caused others. It is about how that didn’t stay his present. He changed it.

Through the power of the Holy Spirit.

I want to show you one more picture 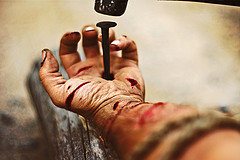 This is another form of blood art. But it is more than that.

This is the blood that was spilled to cover each and every mistake you have made in your life. Christ makes beauty of our mistakes.

Sometimes they come in the form of weird art. Sometimes it is in the form of a street thug turned amazing rapper and community activist. And other times, it happens in middle class America when a man who has been divorced and seen the rifts it has caused to those he loves is given a second chance.

A chance to marry a beautiful woman who loves him deeply. A chance to turn around a life of self-seeking and give it to soul-winning. A chance to do the rest of this life, no matter how much time I have left, a little better than I did it before, seeking Christ before all things and celebrating each blessing that He has given me.

Christ makes beauty of our mistakes.

We are both living proof of it.

I really appreciate you sharing this!

"Sometimes the story we're telling the world isn't half as endearing as the one that lives inside us." -Donald Miller

A worship leader's missus and her views from the pew

My life, My walk, My missions

A Journal of Christian Thought and Expression. Godinterest Ecumenical, Inter-Denominational Christian Publication is where readers find dynamic thinking, and where expert and undiscovered voices can share their faith, culture and life experiences.

We write to remember. To see our thoughts in sentences. So we can hopefully one day figure out what all those words really mean.

this is... The Neighborhood

the Story within the Story

An Ordinary Man Being Awakened By An Extraordinary God

Set your mind on the things above

From Devout Atheist to Skeptical Pastor: A Blog For Busted-Up, Beat-Down People (Like Me)

Daily Thoughts and Meditations as we journey together with our Lord.

My Journey Home
One Salty Dawg

some girls were born with glitter in their veins.

Moving at the Speed of God

Sharing the Thoughts and Adventures of David Jackson, Church Multiplication Missionary with the Baptist Convention of Maryland/Delaware

4 out of 5 dentists recommend this WordPress.com site

Inspiring, Encouraging, Healthy / Why waste the best stories of the World, pour a cup of your favorite beverage and let your worries drift away…

Life, faith and cups of tea.

Write For A Cause

christiannewwave.wordpress.com/
In Spite of Myself
The Journey and the Lesson
newlifer1

Reflections of a Female Seminary Graduate

Penny of a Thought

Contemplating life, freedom, and the pursuit of something more

I am because we are